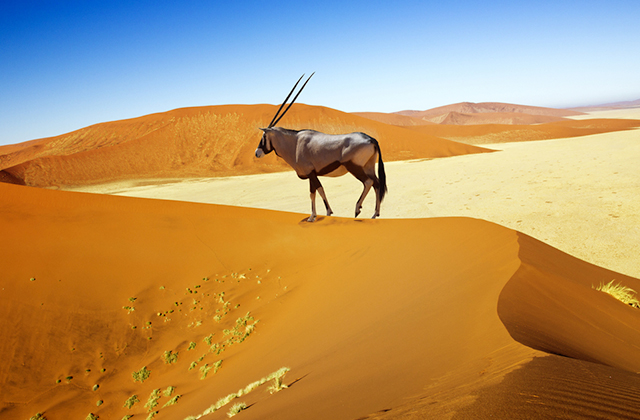 Nowhere in the world will you find a desert destination with as much to offer as Namibia. Climb the highest sand dunes in the world or go in search of the Little Five. Dive into the past in a ghost town where the dunes have all but reclaimed the beautiful old buildings in what was once one of the wealthiest towns in the world. And as you watch the sun set, and wildlife shimmer against one of the most spectacular pans on earth the world sinks into silence and the heavens burst into a million stars. This is Namibia – no ordinary desert destination.
Kolmanskop is Namibia’s most famous ghost town. The town was built on the wealth of the first diamond miners, and residents built it in the style of a German town that included a hospital, casino and ball room. Deserted since the 1950s the relentless forces of the desert ensure that these beautiful old buildings are slowly disappearing into the sand.
Although one expects to see sand dunes in the desert nothing quite prepares you for the incredible red dunes of Sossusvlei. During sunrise and sunset the colours of the dunes are constantly changing from burnt orange, red and violet, turning the landscape into a photographer’s dream. Take the time to climb one of the dunes and you’ll be rewarded with a magnificent view of the Deadvlei, a large ghostly expanse of dried white clay dotted with 500-600 year-old camelthorn trees.
For a change in scenery, a five-day hike of the Fish River Canyon will take you into the second deepest gorge in the world and the deepest canyon in Africa. Carved out of 160 km’s of rock and as deep as half a kilometre, the Fish River Canyon is an absolutely spectacular phenomenon. The best time for the hike is during the cooler months of May to September when you can comfortably sleep under the stars and marvel at the incredible beauty that surrounds you.
On the other side of the country, and in sharp contrast with the Namib and Kalahari deserts, Caprivi is a narrow strip of land about 400 km long that protrudes from the rest of the country like a finger. It borders with Angola, Botswana, Zambia and Zimbabwe and consists mostly of extensive wetlands, floodplains, woodlands and rivers, like the Okavango and Zambezi. It’s an area teaming with wildlife including spectacular herds of elephant, buffalo, hippos and crocodiles and about 340 species of birds.
If it’s wildlife you’re after you cannot go wrong with Etosha National Park, Namibia’s top wildlife destination. Home to the Big Five and a vast variety of birdlife, the Park is especially popular with photographers in the dry season when animals flock to the watering holes.
Heading to the coast where dense fog and violent surf have caused many a ship to run aground on the Skeleton Coast, this part of the country is known as the world’s biggest ship graveyard. The tempestuous water is freezing, so no one comes here for a swim, but shore based fishing is extremely popular here. Despite its appearance, the Skeleton National Park houses a great variety of species with its – big cats, desert-adapted elephant, black rhino and many more.
There is so much to see in this spectacular country, so start planning your holiday today!

Other Destinations in Africa